Get to Know Susie’s Senior Dogs: Support A Senior What has four legs, a wispy Mohawk that flows in the wind, fifteen years of wisdom, and a non-profit organization to save the lives of her pawed pals? There is only one majestic creature that could be all of that and more; her name is Susie.

Back in June, Moomah fell in love with Susie and her parents, Erin O’Sullivan and Brandon Stanton, fellow friends, and supporters of Animal Haven Shelter. Erin, Brandon, and Susie made an appearance at the Animal Haven Spring Benefit, where Erin was presented the Leonard Simon Award for Susie’s Senior Dogs: an organization that focuses on helping older dogs get adopted. Susie and Erin (the leaders of this incredible organization) shine a light on dogs who may be overlooked simply because they no longer belong to the puppy club.

Susie is a senior dog herself. Her dad, Brandon Stanton of Humans of New York, was on one of his great city adventures when he stumbled upon a vision in white with a wispy hairdo. He proclaimed her to be “the greatest dog in New York.” After posting her photograph, Susie became quite the internet sensation. Not long after, Brandon came across Susie and her owner once again, and this time, Brandon was the one being asked a question: Would he be willing to adopt Susie? Unable to afford and take care of her, Susie’s owner needed assistance, and Brandon could not resist. He took her home to meet Erin, and they fell in love with their new friend.

Suddenly immersed in the world of a senior dog, Erin began to do her research and soon realized the unbelievable number of dogs like Susie, who come from terrible backgrounds and are left ignored in shelters simply because of their age. She and Susie set out on a mission to help senior dogs around the country and create a platform on which their stories could be told. In January, Susie’s Senior Dogs was launched and in just one short year it has already helped over 200 senior dogs find good homes. And, those are just the ones that can be counted! Susie has built an incredible online following through Facebook, Instagram, and Twitter, where she tells the stories of dogs in need and updates the world on the most recent senior adoption success stories. Susie’s Senior Dogs has even transcended national borders to help dogs all over the world. On a recent expedition to Ukraine, Erin was astounded by the number of stray dogs and overpopulated shelters. She decided it was time to act. Erin visited a shelter just outside of Kiev and found two hundred volunteers doing everything in their power to maintain a shelter that houses over 2,000 dogs. The resources needed to keep up with that many animals is unimaginable, so Susie’s Senior Dogs began a campaign to raise money. They raised around $6,600, which would go towards funding the construction roofs over the top of the outdoor kennels, to protect the dogs in the shelter from the harsh weather.

Erin realizes that she cannot post all of the stories she receives about senior dogs onto the Susie’s Senior Dogs page, as there are entirely too many in need of a safe home. So how does she choose which to feature? Erin proclaims that she chooses “the small town underdogs:” those seniors who may not get the exposure they need to make their way into the hearts of animal lovers everywhere. Her activity on social media has raised awareness and inspired prospective pet owners around the world to adopt senior pets from their local animal shelter. Even though Susie can only post stories about so many of her fellow dogs, the ideology behind the organization ripples and opens the minds and hearts of potential adopters who take initiative in their hometowns. It’s about opening people up to the idea of adopting a dog who may not be given as much love and attention just because they are a few years older. 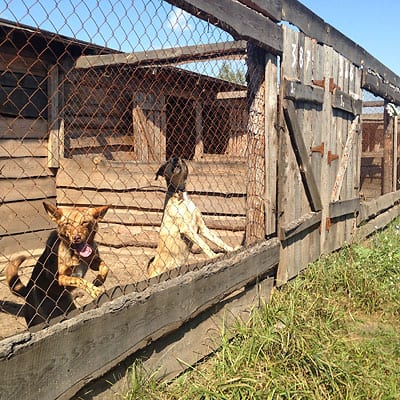 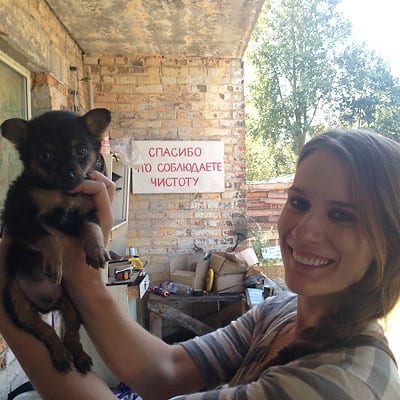 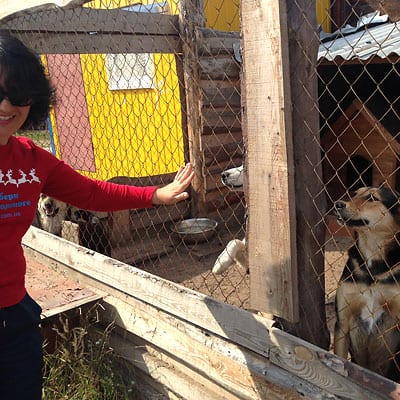 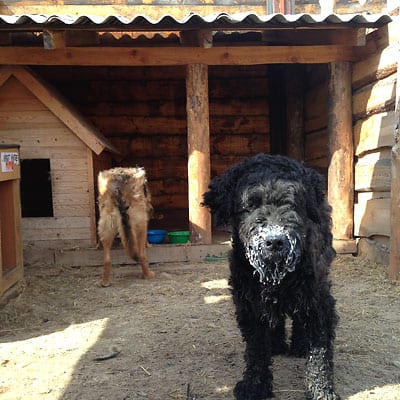 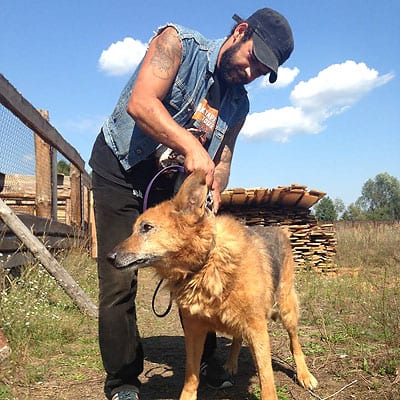 Above: Erin visits Sirius shelter located just outside of Kiev, Ukraine – they house 2,150 dogs and over 200 cats. Not one animal is ever put down for old age or space issues. Photo Credit: Erin O’Sullivan

WHY SUPPORT A SENIOR? Senior dogs have had time to gather wisdom and settle into their mature, and often more relaxed, personalities. A “senior dog” does not necessarily mean a thirteen year old, either. Dogs who are only a few years old are often over looked and not considered when compared to young puppies, who seem to fit the preconceived idea of a “new dog.” At shelters, senior dogs are often left alone and lonely in the back. They are viewed as less desirable, when really they have so much to offer. Erin and Susie want to remind us that just because a dog is old and in need of a home, that does not mean that they are less special than another dog. In fact they may just be the perfect dog for you and your family.

Bringing a new dog into your home is not synonymous with getting a puppy. Often an older dog may be the perfect fit for your home! Puppies tend to be hyperactive and difficult to handle. It can be hard to predict how they will behave and develop as they mature. Senior dogs, on the other hand, have generally mellowed out. Being a few years older means that what you see is what you get. Dogs that have grown out of their puppy phase and have grown into themselves have had time to calm down and develop, physically and in terms of personality. Plus, they will only get sweeter with a loving new family. Senior dogs are great for a family with children because they are more docile and involve much less helicoptering. A dog who has a few years under their belt is more likely to sit on the couch and relax with you than run around and chew on things around the house. Not to mention, they are more likely to let you get a good nights rest.

For those in search of a true man’s best friend, keep an eye out on Susie’s Senior Dogs and visit your local animal shelter to see if there are any older dogs in need of a home. While a tiny ball of energy can be fun, it is likely that a senior dog fits into your family’s lifestyle better than you would imagine! “I think the idea that kids need a puppy is silly. My kids didn’t know the difference…Rudy was new to us and they were thrilled.” “My mom didn’t dislike animals, but she didn’t like them either… Long story short, she and Michael (now Nugget) are on a cross country road trip back to California where my mom lives, seeing all the sights along the way.” “We walked down the first dog run, and my son, J’Shawn just kept walking, turned a corner poked his head in Chubbs’ cage, and said “That’s him. That’s my dog, he’s the one I want!” I offered to let him look around, check out more dogs but he was adamant that Chubbs was his dog.”

Read Susie’s TIPS ON OTHER WAYS TO HELP SENIORS dogs »

Looking for a Senior Dog?